Study 1 (NCT#00075218) was a 2-arm, international, randomized, double-blind, placebo-controlled trial of SUTENT in patients with GIST who had disease progression during prior imatinib mesylate (imatinib) treatment or who were intolerant of imatinib. The objective was to compare time-to-tumor progression (TTP) in patients receiving SUTENT plus best supportive care versus patients receiving placebo plus best supportive care. Other objectives included progression-free survival (PFS), objective response rate (ORR), and overall survival (OS). Patients were randomized (2:1) to receive either 50 mg SUTENT or placebo orally, once daily, on Schedule 4/2 until disease progression or withdrawal from the study for another reason. Treatment was unblinded at the time of disease progression. Patients randomized to placebo were then offered crossover to open-label SUTENT and patients randomized to SUTENT were permitted to continue treatment per investigator judgment.

At the time of a prespecified interim analysis, the intent-to-treat (ITT) population included 312 patients. Two hundred seven (207) patients were randomized to the SUTENT arm and 105 patients were randomized to the placebo arm. Demographics were comparable between the SUTENT and placebo groups with regard to age (69% versus 72% <65 years for SUTENT versus placebo, respectively), sex (male: 64% versus 61%), race (White: 88% both arms, Asian: 5% both arms, Black: 4% both arms, remainder not reported), and performance status (ECOG 0: 44% versus 46%, ECOG 1: 55% versus 52%, and ECOG 2: 1% versus 2%). Prior treatment included surgery (94% versus 93%) and radiotherapy (8% versus 15%). Outcome of prior imatinib treatment was also comparable between arms with intolerance (4% versus 4%), progression within 6 months of starting treatment (17% versus 16%), or progression beyond 6 months (78% versus 80%) balanced.

The planned interim efficacy and safety analysis was performed after 149 TTP events had occurred. There was a statistically significant advantage for SUTENT over placebo in TTP, meeting the primary endpoint. Efficacy results are summarized in Table 8 and the Kaplan-Meier curve for TTP is shown in Figure 1. 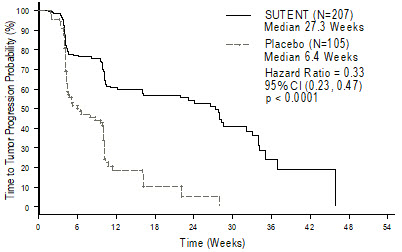 The final ITT population enrolled in the double-blind treatment phase of the study included 243 patients randomized to the SUTENT arm and 118 patients randomized to the placebo arm. After the primary endpoint was met at the interim analysis, the study was unblinded, and patients on the placebo arm were offered open-label SUTENT treatment. Ninety-nine (99) of the patients initially randomized to placebo crossed over to receive SUTENT in the open-label treatment phase. At the protocol specified final analysis of OS, the median OS was 72.7 weeks for the SUTENT arm and 64.9 weeks for the placebo arm [hazard ratio (HR)=0.876, 95% confidence interval (CI) (0.679, 1.129)].

Study 2 was an open-label, multi-center, single-arm, dose-escalation study conducted in patients with GIST following progression on, or intolerance to imatinib. Following identification of the recommended regimen (50 mg once daily on Schedule 4/2), 55 patients in this study received the 50 mg dose of SUTENT on treatment Schedule 4/2. Partial responses (PR) were observed in 5 of 55 patients (9.1% PR rate; 95% CI: 3.0%, 20.0%).

Study 3 (NCT#00083889) was a multi-center, international, randomized study comparing single-agent SUTENT with interferon alfa was conducted in patients with treatment-naïve RCC. The objective was to compare PFS in patients receiving SUTENT versus patients receiving interferon alfa. Other endpoints included ORR, OS, and safety. Seven hundred fifty (750) patients were randomized (1:1) to receive either 50 mg SUTENT once daily on Schedule 4/2 or to receive interferon alfa administered subcutaneously at 9 million international units (MIU) 3 times a week. Patients were treated until disease progression or withdrawal from the study.

There was a statistically significant advantage for SUTENT over interferon alfa in the endpoint of PFS (see Table 9 and Figure 2). In the prespecified stratification factors of lactate dehydrogenase (LDH) (>1.5 ULN versus ≤1.5 ULN), ECOG performance status (0 versus 1), and prior nephrectomy (yes versus no), the hazard ratio favored SUTENT over interferon alfa. The ORR was higher in the SUTENT arm (see Table 9). 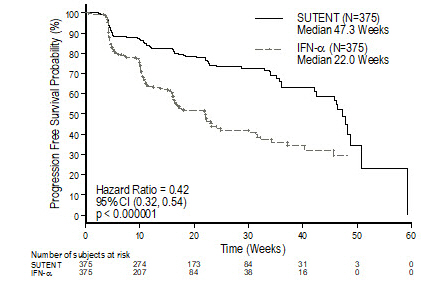 The use of single-agent SUTENT in the treatment of cytokine-refractory RCC was investigated in 2 single-arm, multi-center studies. All patients enrolled into these studies experienced failure of prior cytokine-based therapy. In Study 4 (NCT#00077974), failure of prior cytokine therapy was based on radiographic evidence of disease progression defined by response evaluation criteria in solid tumors (RECIST) or World Health Organization (WHO) criteria during or within 9 months of completion of 1 cytokine therapy treatment (interferon alfa, interleukin-2, or interferon alfa plus interleukin-2; patients who were treated with interferon alfa alone must have received treatment for at least 28 days). In Study 5 (NCT#00054886), failure of prior cytokine therapy was defined as disease progression or unacceptable treatment-related toxicity. The endpoint for both studies was ORR. Duration of response (DR) was also evaluated.

One hundred and six patients (106) were enrolled into Study 4 and 63 patients were enrolled into Study 5. Patients received 50 mg SUTENT on Schedule 4/2. Therapy was continued until the patients met withdrawal criteria or had progressive disease. The baseline age, sex, race, and ECOG performance statuses of the patients were comparable between Studies 4 and 5. Approximately 86%–94% of patients in the 2 studies were White. Men comprised 65% of the pooled population. The median age was 57 years and ranged from 24 to 87 years in the studies. All patients had an ECOG performance status <2 at the screening visit.

In the adjuvant treatment setting, SUTENT was investigated in S-TRAC (NCT#00375674), a multi-center, international, randomized, double-blind, placebo-controlled, trial in patients with high risk of recurrent RCC following nephrectomy. Patients were required to have clear cell histology and high risk of recurrence defined as ≥T3 and/or N+ tumors. Six hundred fifteen (615) patients were randomized 1:1 to receive either 50 mg SUTENT once daily on Schedule 4/2 or placebo. Patients were treated for 9 cycles (approximately 1 year), or until disease recurrence, unacceptable toxicity, or withdrawal of consent.

The major efficacy outcome measure was disease-free survival (DFS) in patients receiving SUTENT versus placebo as assessed by blinded independent central review (BICR). Overall survival was an additional endpoint. There was a statistically significant improvement in DFS in patients who were treated with SUTENT compared to placebo (Table 11 and Figure 3). Prespecified subgroup analyses are presented in Table 12. At the time of the DFS analysis, overall survival data were not mature, with 141/615 (23%) patient deaths. 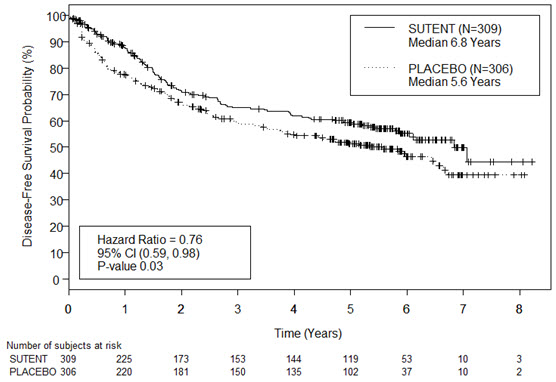 Study 6 (NCT#00428597) was a multi-center, international, randomized, double-blind, placebo-controlled study of single-agent SUTENT conducted in patients with unresectable pNET. Patients were required to have documented RECIST-defined disease progression within the prior 12 months and were randomized (1:1) to receive either 37.5 mg SUTENT (N=86) or placebo (N=85) once daily without a scheduled off-treatment period. The primary objective was to compare PFS in patients receiving SUTENT versus patients receiving placebo. Other endpoints included OS, ORR, and safety. Use of somatostatin analogs was allowed in the study.

As recommended by the Independent Data Monitoring Committee, the study was terminated prematurely prior to the prespecified interim analysis. This may have led to an overestimate of the magnitude of PFS effect. A clinically significant improvement for SUTENT over placebo in PFS was seen by both investigator and independent assessment. A hazard ratio favoring SUTENT was observed in all subgroups of baseline characteristics evaluated. OS data were not mature at the time of the analysis. There were 9 deaths in the SUTENT arm and 21 deaths in the placebo arm. A statistically significant difference in ORR favoring SUTENT over placebo was observed. Efficacy results are summarized in Table 13 and the Kaplan-Meier curve for PFS is in Figure 4.

Figure 4. Kaplan-Meier Curve of PFS in the pNET Study 6 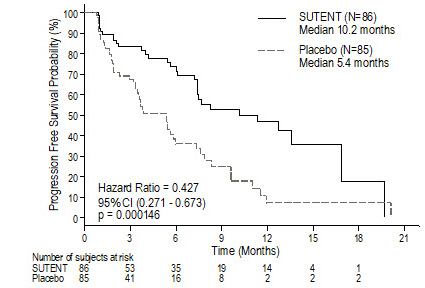